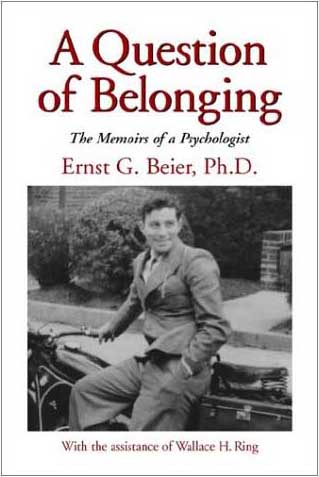 In this book, I have drawn on the memory of my youth as a Jew growing up in Germany between the two world wars. The book details my coming of age in a Germany which had suddenly turned hostile to my sense of identity. While Germany was still rich in culture and tradition, even before my teens I suffered under the gradual onset of Nazism and its dissolution of German culture. As a Jew I experienced the pain of being consigned to the category of “human waste” and knew the feeling of not belonging, which was exacerbated by the complication and danger of falling in love with blue-eyed, blonde-haired Madi while attending a private school. Our love was one of bravery in the face of very adverse circumstances. It was a profound loss when she and her family were taken away by the Nazis.I witnessed Hitler’s forces at work in every aspect of my life, including the methodical killing of members of my family and the confiscation of our family’s assets; after getting involved in resistance activities against the new regime I was lucky to have been able to escape, and I did so in a rather surprising manner with the Gestapo pursuing at my heels. I eventually made it to the United States, only to return to Europe within a few years with the US Army to fight the regime of my former countrymen. I fought as a foot soldier from the beaches of Normandy across France and was captured by the Germans at the Battle of the Bulge and returned to Germany as a prisoner of war. (After the war I was eventually was given a silver battle star for having survived five battles.)

My experiences in the Nazi POW camp are of crucial importance in the book’s development. My sense of belonging was further questioned as even some of my fellow prisoners doubted my authenticity as an American (I had become an American citizen by then). The camp was dominated by a fanatic Gestapo officer who, in his zeal to help the Führer as much as he could, had a hobby of using prisoners suspected of being Jews or traitors as target practice. None of the individuals who were called to be interrogated by him ever returned alive. When, finally, I was called in to see him, I resigned myself to the prospect of certain death, yet I was saved in an incredible interview in which I was armed only by my love for Madi (though I did not even know whether she was still alive) and by my familiarity with German culture, in particular my passion for Goethe’s ” Faust.” It turned out that the Gestapo murderer was highly educated. It was an experience that shaped my life for years to come up to this very day.

After the POW camp was liberated by the advancing American Army I returned to America and devoted my energy to searching for my lost love. I learned that the feeling of belonging is not an empty construct, but rather a gift which is bestowed when you give of yourself. For after the war I was no longer a refugee – I was an American and accepted my Jewish origins.

Much of this information is autobiographical and the narrative is written in the first person. Some fictitious events have been added to the story, such as conversation, to improve its development as a novel.

Check for it in Amazon